GETTING OUT OF LINE

Getting out of line in Europe is visiting sites that don’t have lines in the first place. 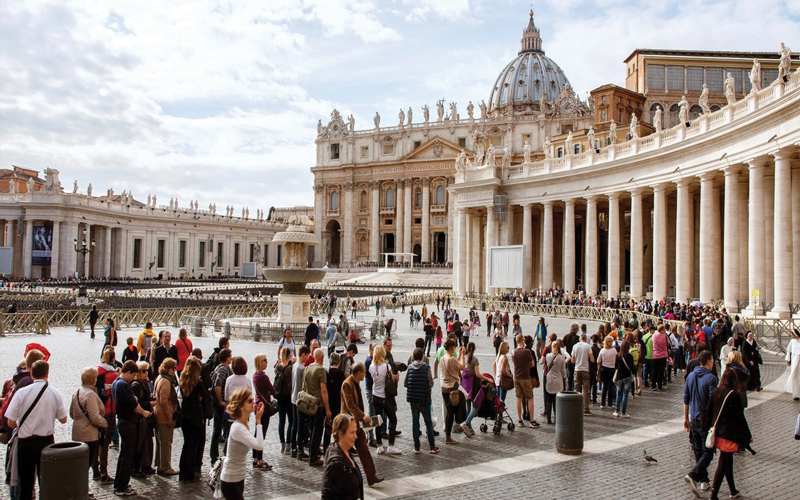 It’s been a few years since I visited Rome. And as usual, I was searching for even more undiscovered sites and discovered something new – crowds everywhere resulting in tremendous lines.  And it wasn’t even high season – just shoulder season – with too many shoulders in front of me trying to get into the most popular sites, such as the Coliseum.

Even if you buy expensive “Skip the Line” admission, you can’t skip the security lines.
A few years ago you could just walk into St. Peter’s in Vatican City free of charge, and free of lines. While admission is still free, the security line for St. Peters was more than an hour.  And once you’re inside, there’s an additional line for checking backpacks.  In Europe in 2019 you can spend more time in security lines than you spend actually seeing the site once inside!

One of the many things I like about Rome is seeing the same old familiar sites I saw when I first visited decades ago. That makes me feel young. Going to Rome in 2019 still makes me feel young. When I look in a mirror I see lines – however, I see many more lines revisiting the most popular Roman sites. And one thing I’ve learned as I get older is  “time is precious” – especially while on vacation.

Let’s take a look at great sites without great lines. Too many people have the impression that there’s nothing new to discover in Rome — that it’s literally ‘the same old, same old.” Every time I visit Rome I find “the new old, new old.” In Manhattan I advise my tour groups to “look up” to see skyscraper rooflines. In Rome, my advice is “look down — and go down.” The future of Rome’s tourism is digging up its past — so let’s visit sensational new excavations newly opened to the public — with no lines and therefore, no expensive “Skip the Line” admissions.

The Roman Forum (with the exception of the Curia and the Temple of Romulus) is mostly composed of a column here, an architrave there. On my latest visit – across the street from the Roman Forum — I made a wonderful new discovery –Palazzo Valentini — an historic building in its own right. However, the main reason to visit is to see the recently excavated underground Ancient Roman frescos — as bright and beautiful as those at Pompeii — and its gorgeous mosaics.

Here’s an architectural historian’s tip. Many Southern European churches were built over pagan Ancient Roman temples such as Barcelona’s cathedral. Imagine how many churches in Rome — the city of churches and the city of Ancient Roman ruins — have substructures yet to be explored.

One of my favorite churches is Rome’s Santa Maria Maggiore with its 5th-century Early Christian mosaics. Just recently the Ancient Roman excavations of its long buried Early Christian/Late Ancient Roman church have opened to the public. To explore these fascinating excavations requires only 5 Euros, no line and minimal security inspection upon entering — not even taking 5 minutes.

Here’s another sightseeing tip. Many of the larger and more famous Roman churches have side chapels – designed by famous architects – which tourists just walk by — Santa Maria Maggiore’s Sforza Chapel was designed by the one and only Michelangelo. When you view St. Peter’s from its eponymous square – you are not looking at Michelangelo’s architecture but the work of architects who came after him. The only way you can view Michelangelo’s contribution to St. Peter’s is from the garden or peaking through a window from the Vatican Museum to see St. Peter’s rear. To do that requires waiting in long lines.

To visit the even more refined architecture of Raphael is quite a feat because it’s so rare. Sophisticated tourists visit Santa Maria del Popolo to see its magnificent Caravaggios – while there take a quick look at the Chigi Chapel on the left (as you enter) to see Raphael’s simple yet elegant architecture. Unlike Santa Maria Maggiore — there isn’t even any security inspection upon entering. Because so few even know those Renaissance master architects designed chapels — there’s even unobstructed viewing (and photography) without anyone in front of you.

During high season and holidays — even with “Skip the Line” tickets to enter the Vatican Museum — there are still long lines especially with its strict security. While the Vatican Museum has spectacular sites that can’t be seen anywhere else – the Sistine Chapel and Raphael Rooms – it is also the largest depository of Ancient Roman sculpture found and collected in Rome over the centuries by many Popes. And yet, it seems that every time I visit – some of those papal sculpture galleries are closed.

For years the bulk of the Capitoline Museums’ sculpture collection was in storage until its satellite, the Centrale Montemarini Museum, opened in an abandoned power station – like London’s famous former power-station museum — the Tate Modern. Even during high season – there are never any lines. And the collection is fantastic featuring my favorite Roman Sculpture, “Patrician Holding Busts of His Ancestors” – three Roman portrait busts in one!

Two other great Ancient Roman sculpture museums — both branches of the National Roman Museum in Central Rome — have famous sculpture without lines. They’re the Palazzo Massimo alle Terme with the famous “Discobolus” – “Discus Thrower.” And the Palazzo Altemps (a 15th-century palace near the Piazza Navona) housing the famous Ludovisi Collection with its star sculpture “The Suicide Gaul.”

When I first visited Rome, the Coliseum was free and there were no lines. Today there’s only one major site that you can enter free without lines or even a security check. It’s the most spectacular Ancient Roman building in the world — the Pantheon.

Around the corner from the Pantheon is another great site that’s free without any lines at all — the church of St. Ignatius Loyola. The ceiling over the nave appears unusually high – so high you can barely see its center painting rising above the walls. Or what you think are walls – which in reality are painted FAKE WALLS — which frame the center painting merely suggesting height through exaggerated perspective — known as “trompe l’oeil.” To top that off there’s also a dome — a painted FAKE DOME.

There are more churches without long lines and many without security lines. In winter we wear “The Layered Look” — while touring Rome — you should visit the ultimate in “The Layered Look — in Churches” — San Clemente — featuring many underground layers: The Medieval Baroque main floor — the Early Christian church second lower level and below that an Ancient Roman Mithras Temple — with an altar featuring the bas relief “Mithras Sacrificing a Bull.” And it’s just a three-minute walk from the “mobbed “Coliseum.

The Church of Saints Giovanni & Paolo doesn’t have any lines. In fact, sadly — during my last visit — I was the only visitor. These underground excavations reveal the homes of two soldiers, Roman legionnaires, who became martyrs. Their excavated home has Late Roman/Early Christian frescoes of those two martyred saints. In addition, there’s an underground, excavated Roman Street with homes featuring over 20 Ancient Roman rooms — many with brightly-colored frescoes.

Once again, you don’t have to buy “Skip the Lines” where no lines of any kind exist. Let’s go back to church again, but this time on Sunday. Usually churches don’t allow tourists to visit on Sundays – during services. This church is open only on Sunday – Borromini’s exquisite gem — Saint Ivo alle Sapienza — near Piazza Navona It’s open free — Sunday 9 AM to Noon — and you just walk right in. Whoever thought Baroque architecture was too ornate with cherubs that are too fat, must see St. Ivo. It’s a small church, but the undulating walls of the chapel are extended upward forming the unusually shaped dome — using the same curves. It’s the simple architecture (with minimal applied decoration) that overpowers.

Borromini was the chief competitor of the better-known Baroque architect — Bernini — who designed St. Peter’s colonnade. Bernini designed another small church in competition and contrast to Borromini’s – Saint’ Andrea al Quirinale in which the small oval chapel’s walls rise up creating an oval dome (echoing the same shape as the chapel) – with a few cheerful cherubs thrown in. I won’t tell you which I like better until you see them both for yourself.

While we’re in Palazzo Barberini visit the formal garden in the back (which I previously wrote about). If you like Ancient Roman Mithras shrines — there’s an excavated one hidden in the garden. Unlike the Mithras Shrine in San Clemente, the sacrifice of this bull is featured in an Ancient Roman fresco. (Palazzo Barberini is worth a visit in its own right for its outstanding painting collection – and, of course, there are no lines.)

Here’s another tip on how avoid both lines and the high cost of “Skip the Lines.” Go to the site’s actual website. Chances are you can directly book admission and tours designed to eschew long lines for in favor of advance inexpensive small-group bookings. That’s how Rome’s largest palace, the Quirinale Palace — avoids lines. Quirinale Palace – is the Palace of Popes, then the Palace of the Kings of Italy and – today – the Palace of the President of Italy. It’s just down the block from Bernini’s Saint’ Andrea al Quirinale. The tour lasts 90 minutes and the booking fee online is a mere 1.5 Euros — so you can again skip the expensive “Skip the Line” booking.

A group of around 30 gather at the palace gate waiting less than a mere 15 minutes before the tour starts. Because it’s the President of Italy’s Palace, sure there’s a security check. But because you have to book at least 5 days in advance – your security is checked before the visit. And because there are so few tourists for each visit the on-site security check is minimal. The Quirinale Palace is truly sensational — different architecture and décor in covering many centuries.

And there are many other sites that you can easily and inexpensively arrange by contacting their website directly – even privately owned palaces. And sometimes you might even be the only visitor – and what could be more “elite” than that? Speaking of “elite” one evening I saw Guercinio’s trompe l’oeil ceiling fresco, “Aurora,” in the Ludovisi Villa and I even met the Dowager Princess to boot. (Plus there’s a surprise Caravaggio fresco on the kitchen ceiling – which hardly gets any buzz.) And who knows, you might even meet the current Princess Ludovisi, America’s former Rita Jenrette – (Google her and see what an honor that really is.)

Or better yet, wait until my first “Been There, HAVEN’T Done That” Rome tour departs and travel with me to see all the above – and more. Don’t worry about lines – if more than 20 people want to sign up – I’ll just create more departure dates.