Not your Garden Variety Gardens

Over the years we’ve visited hundreds of museums, palaces, and churches - 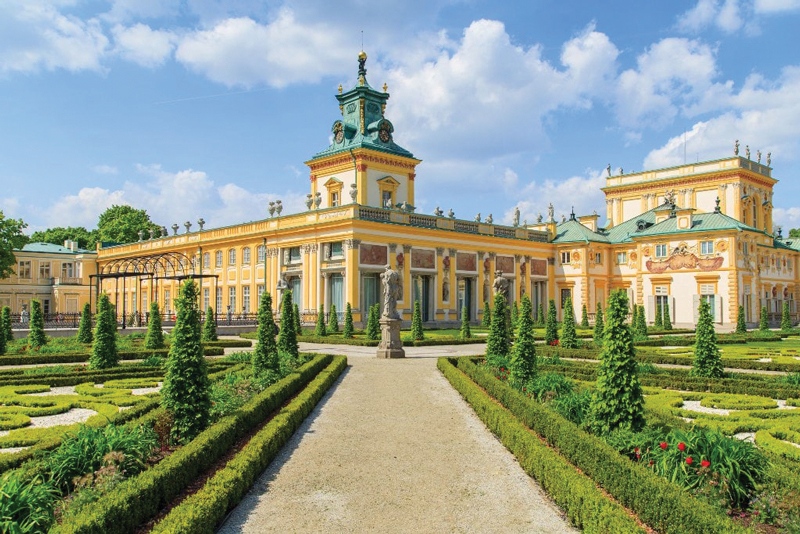 Just as with architecture – gardens – like the flowers in them – come in different varieties. There are Japanese gardens you’ll find from Kyoto to Brooklyn. And there are even cacti gardens from Cape Town’s Company Garden to the Huntington Museum in Pasadena. There are border gardens that you’ll find at Shaw’s Corner (home of George Bernard Shaw) to Thomas Jefferson’s home, Monticello. Maybe that’s what should be planted at the US/Mexican border – a border garden – of poison ivy.

However, in Europe let’s categorize gardens into two major styles: The French Formal Garden and the English Landscape Garden – aka the “ ‘Natural’ Garden.”

Being both a Francophile and an Anglophile – you’ll have to read this entire column – continued online – to discover the true difference between the two totally dissimilar garden styles.

Besides defining the two styles – I also recommend where to visit the best French Formal Gardens, the best English Landscape Gardens – and the best palaces and parks that incorporate both distinct garden styles. And there’s also a surprise – you’ll find out which style is usually artificial – FAKE gardens!

Let’s start our garden journeys with the older garden – the French Formal Garden.

1. French Formal Gardens — incorporate flowers in geometric patterns bordered and framed by boxwood or hedges. A frequently used pattern in France is the Fleur de Lys. Like the Nazca Lines in Peru – flower patterns or “parterres” are best viewed from overhead. I’m waiting for the White House to add French Formal Gardens — flowers in patterns spelling the word, “Trump.” (But that will never happen because planes are not allowed to fly over the White House.)

The French Formal (floral) Garden was derivative of the Italian Renaissance Garden such as the Villa d’Este, Villa Lante and Villa Farnese all in Lazio outside Rome. Except those gardens are self-contained frequently inside walls – as is the magnificent garden of Chateau Villandry in the Loire Valley – composed of many different formal garden designs. Also in the Loire Valley is a chateau with two formal gardens – an Italian and French. An even more direct link that brought Italian formal gardens to France was Marie de Medici, wife of King Henry IV. Her Paris palace, today’s Luxembourg Gardens, is still a French Formal Garden.

French Formal Gardens enhance a building’s architecture. In many cases they’re the main attraction. In fact, since the most elaborate formal gardens are closest to palace’s garden façade –floral parterre patterns are seen as an extension of the palace interior’s Aubusson carpets – or in the case of Russian palaces –an extension of their elaborate patterned intarsia wood floors.

The “Powers of the Axis” has nothing to do with WWII – and everything to do with French Formal Gardens. The main axis is a straight line which usually leads from a palace’s garden façade — traveling across the entire garden – usually composed of floral parterres on sides – and ending far away in the horizon. The main axis divides the French Formal Garden into two identical symmetric halves.

Frequently the main axis is bordered by boxwood hedges or trees trimmed into geometric shapes such as cones — topiary. One of the best examples of a main axis – or rather — three main axes — trimmed with topiary radiating from the palace –is at Hampton Court near London. Those three main axes are bordered by yew trees — which are trimmed as cones.

While French Formal Gardens have main axes – they can also have radial axes that offshoot the main axis –- these frequently have hidden surprises such as fountains and/or statues that you find at Versailles and Schoenbrunn Palace (Vienna) and Peterhof (outside St. Petersburg).

On a cerebral level French Formal Gardens are the manifestations of Descartes’ philosophy – of “man over nature”—the triumph of mathematics– as exemplified by geometric flowerbeds. The sky’s the limit with rational science. In the case of French Formal Gardens – the horizon is the limit. This philosophical approach to gardening fit right in with Louis XIV’s concept of the “Sun King” – where Versailles’ gardens stretches to horizon for the last glimpse of the sun before it sets over the entire garden.

Let’s look at the best French Formal Gardens. My favorite French Formal Garden is the first major work of the great French gardener Andre Le Notre. It’s the garden of my favorite French chateau –- Vaux le Vicomte. Vaux le Vicomte (just 22 minutes by RER from Paris’ Gare de Lyon) exemplifies the best of the French Formal Garden. The garden overpowers the view from its French doors (floor to almost ceiling glass) in the oval rotunda – inviting you to step through them to see the garden with a grand canal leading your eye (through exaggerated perspective) all the way to the horizon ending with the statue of the Farnese Hercules.

And when you finally make it to the axis’ vanishing point — turn around and view the chateau – it’s a mystical vision in which a magnificent building crowns the perfect picture.

The most famous French Formal Garden is of course Versailles – which is Le Notre’s signature work. Even with “Skip the Line” tickets, you still wait to enter the main palace plus its long security checks. The best thing about the famous Hall of Mirrors is seeing the reflection of Versailles formal garden parterres. A long scenic walk takes you to the smaller French Formal Gardens of the Grand Trianon and the Petit Trianon. Both Trianon’s chateaux are gems themselves and (unlike the main palace) have petit lines or no lines at all.

The French Formal Garden was all the rage in Europe and beyond from the late 17th century to the middle of the 18th century from Warsaw’s spectacular Wilanow Palace to Williamsburg’s (Virginia) Governor’s Palace.

Here are a few of my favorites:

Peterhof – St. Petersburg — Saving the best for last – Peterhof – the 18th-century palace on the Gulf of Finland – with not just one French Formal Garden – but two front and back. The incredible cascading fountains garden façade has fountains starting at the palace flowing down stepped parterres lined with gold statues. In addition to the formal garden façade, the city façade is also situated in a French-style formal garden – unlike Versailles mismatching city façade situated in a stone courtyard. While both Versailles and Peterhof have grand canals — Peterhof’s grand canal is accompanied by fountains on both sides ending in the Gulf of Finland instead of woods. Unlike Versailles you don’t have to make an appointment to see the fountains of Peterhof — which operate daily during high season because they’re fed by gravity.

Peterhof’s flowers last until the fountains are turned off in October during freezing Russian weather. I was just at Versailles the first week in October and already the flowers – still in full bloom – were ripped out from their roots in 80 degree plus temperature. It’s about time that Versailles stopped the murder of innocent flowers struck down in their prime!

The above list could go on and on and on – like a French Formal Garden’s central axis.

If French Formal Gardens are based on a rational planned geometric schemes espoused by Rene Descartes, the English Landscape Garden is also based on French philosophy – Jean-Jacques Rousseau. (I had to bring up philosophers so you’ll know for sure I’m a “professor.”) Rousseau believed in a “return to nature.” Even the most geometric and structured of all gardens, Versailles saw a “return to nature” – the natural landscape with rolling hills and grottos – and even a FAKE farm – Marie Antoinette’s Hamlet where she played FAKE shepherdess – until the peasants played real revolutionaries.

While French Formal Gardens are designed to extend the architectural splendor of the palace or chateau outdoors, English Natural Gardens look as if the building was plopped in the middle of a Claude Lorrain pastoral landscape painting.

Here’s the irony. Frequently natural English Landscape Gardens are anything but “natural.” In fact – it’s FAKE nature. The only thing that’s real about English Landscape Gardens is their asymmetry – and even that in reality is planned. In many of these asymmetrical “natural” gardens you walk artificially planned crocked paths to discover Ancient Roman to Gothic Ruins – FAKE ruins. Occasionally, these English-style natural gardens go even more exotic with FAKE Chinese pagodas.

William III (the Dutch king — part of the William & Mary team) brought French/Dutch formal gardens to England. They were torn up by Le Notre’s arch nemesis – a century later – “Capability” Brown — who brought the FAKE English Landscape Architecture to the best country estates in England including perhaps the most historic and famous – Blenheim – birthplace of Winston Churchill. (Maybe it’s a descendant of Capability Brown who snuck into Versailles’ gardens in full bloom and tore out those perfectly beautiful flowers.)

Okay, I believe you get the (retouched) picture that English Landscape Gardens are even more FAKE than the “Housewives of Beverly Hills.”

Let’s look at some of the examples of English Landscape Gardens:

Englischer Garden – Munich – one of the earliest city parks (late 18th century) in the English Landscape Style – a style setter for the great urban parks of the 19th century:

Central Park – New York City – in which all the FAKE lakes and winding paths traversing in and out and over bridges – is more artificial than Paris’ Tuileries. Sadly the Bethesda Fountain is sunken. If it were raised instead – there would be a long axis from Fifth Avenue and Central Park South ending in the Bethesda Fountain – very Parisian. (It’s already lined with statues — so all they’d have to do is add patterned flower beds – and water.)

In the last years of the 20th century and first years of the 21st century French Formal Gardens are making somewhat of a comeback – reclaiming empty lawns and restoring symmetrical geometric floral parterres on both sides of the main axis.

Among the best restored French Formal Gardens are:

Pavlovsk – (Yes, it has as a small formal garden) – St. Petersburg

Catherine Palace Park – Tsarskoye Selo – St. Petersburg – immediately outside the Catherine Palace is a French Formal Garden – in the park is an artificial lake with a bridge that’s almost an exact copy of the bridge at Stowe.

Caserta Palace – near Naples Italy – an English Style Garden was added in the 19th century.

Then there are gardens — which people like so much they want to stay forever and never leave. These gardens combine sculpture and history – and many even churches attached near them. They cemeteries. Coming next “Great Cemeteries of the World” – which I’m also peddling as an international TV series.