Nowadays, two questions are on the minds of tour operators, travel agents -- and above all – tourists. 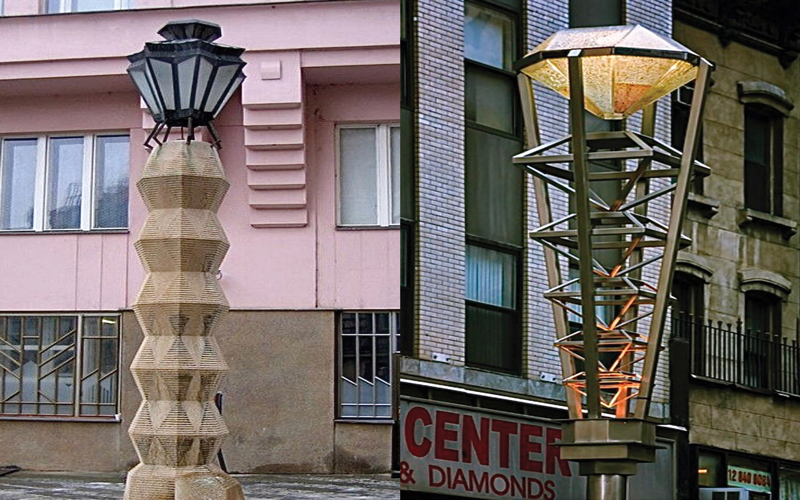 That question is the really about “above all” — “When will plane travel be safe?” Let me take you on a “plane trip” that’s safe, totally amazing, and unique – that you’ll find in only one city in the entire world – Prague’s Cubist Architecture.

“Cubism” is an artistic movement that bridged the gap in the very short period 1912 to 1918 — between Art Nouveau and Art Deco. And unlike Art Nouveau and Art Deco – Cubism was limited to painting and sculpture except in one city – Prague. In Prague you can gaze at a Cubist Painting – you can walk around Cubist sculpture – but only in Prague can you actually visit Cubist Buildings that contain Cubist painting and sculpture. And if that’s not enough Cubism for one city – you can also sit on Cubist Furniture – while eating in a Cubist Restaurant — while sipping your iced teas from Cubist Glasses with – real ice cubes.

Imagine a diamond engagement ring with only a few facets. (I don’t think with a ring like that a fiancé will be around long enough for her honeymoon — in Prague, of course.) That’s the same faceted concept the major Czech Cubist Architects, Josef Gocar, Josef Chochol and Otavar Novotny applied to their Cubist Buildings.

If you look at a traditional engagement ring — you’ll see the repeating inherent design inherent is the “Pyramid.” It’s the same with Cubist architecture breaking out of the traditional flat two-dimensional horizontals and verticals jutting into another third-dimensional plane – the viewer’s. Therefore, you’ll see pyramids and triangles defining Cubist Buildings and spilling over onto the street. Prague even has Cubist Street Lamps – comprised of triangular pyramidal blocks. And guess what other major street in a major city copied the Cubist Street Lamp? New York City’s 47th Street between Sixth and Fifth Avenues – aka “The Diamond District.” So Cubism comes full circle – or rather “full cube.”

(FYI: A few blocks south of 47th Street on Fifth Avenue is the beautiful 21st-century Langham Hotel – if you look carefully at the windows, yes, they’re “Cubist,” too.)

“The House of the Black Madonna” matters. It’s Prague’s Must See Cubist building you’ll probably be passing anyway since it’s right on the “Royal Coronation Route” in the city center. No, it’s not a Convent – the “Black Madonna” — a statue in a corner niche — was transferred from an older former building on the site. “The House of the Black Madonna” (1911) is Prague’s earliest and most famous Cubist Building. It was designed as a department store – and since it’s in the heart of the city — it had to conform to much older buildings. Therefore to make a statement — and have this corner building a standout — the detailing on all three sides was Cubist – horizontal and vertical lines meeting in triangles and extending outward as two-sided pyramids.

The House of the Black Madonna uses “Modernist” construction techniques introduced in Chicago Skyscrapers in the first decade of the 20th century – reinforced concrete – enabling its large fenestration. Reinforced concrete also revolutionized the interiors – allowing large open spaces without supporting columns. Look no further than its beautiful Orient Café on the first floor — which is the world’s only remaining original Cubist interior. And, everything there is Cubist: plates, silverware, lighting fixtures – even the menu. (And the food is good, too.)

And if you want to visit the Museum of Cubist Architecture – after your lunch at the Orient Café just climb the stairs up one flight (holding on to the Cubist railing) to the Cubist Museum – a branch of Prague’s Museum of Decorative Arts (which just went through an outstanding major renovation). Everything you can imagine – furniture, china and vases is there. Plus everything you can’t imagine such as Cubist toys – even a Cubist kitchen sink. There’s also a wonderful gift shop that shouldn’t be missed. I bought so many Cubist gifts – I just wish they sold a Cubist suitcase that I could carefully carry them back home in.

Now that you’ve had the best introduction – an immersion into Prague’s Cubist Architecture – in one convenient location – it’s time to branch out and visit a few other great Cubist buildings. And because they’re spread out in many different districts – you’ll get to cover other sites in Prague that most people don’t know about, (Hey, that’s what “Been There, HAVEN’T Done That” is all about – going into its 11th year.)

The Kovaroviv Villa, 1914 by Josef Chochol has more slanting surfaces – than an Emirates Waterpark. The surfaces are deep so when they meet each other – the windows look as if they were pushed back in. The projecting crystal-like pyramidal surfaces have a distinctive sculptural look allowing for the light to cast different shadows as it moves throughout the day. In addition, the Kovaroviv Villa is in Prague’s Vysehrad District with its Castle and the simple, but elegant round Romanesque church of St. Martin.

Within walking distance is my favorite Cubist Building – the Hodek Apartment House from 1914 (also by Chochol) — occupying an uneven corner site which it triumphantly dominates. The diagonal folds are so deep that it doesn’t even look like stone sculpture but more like origami – Japanese folded paper. The shadows are deepest and most overpowering at noon on a very sunny day. The corner apartments even have balconies — which look as if they’re floating from the column that negotiates the turn from the main street to the side street. When viewed from the side — the Hodek Apartment House looks like a Le Corbusier “Brise Soleil” sun-shielding building with its deeply set-in windows temporarily “disappearing” from view. In fact, the Hodek Apartments could easily pass for a 21st-century building – and a magnificent one at that.

Rounding off Cubist Architecture – literally – is “Rondo Cubism” — the post WWI Cubist Architecture that predominates through the early 1920s – moving Prague architecture closer to Art Deco. My favorite Rondo Cubist building is not far from my favorite Art Nouveau building – Prague’s Lincoln Center under one roof – the Municipal House. From the Municipal House’s balcony — Czechoslovakia was declared an independent republic in 1918. Josef Gocar and other Czech architects transferred their pride in their country’s new independence into architecture in the Czech Legion’s Bank (1923). Instead of angles and planes – curves come into play. (Unlike contemporary women’s fashions – in which the female figure had fewer curves as the 1920s progressed.) Playing on newfound national pride, Gocar was influenced by the curves in Moravian art.

The Czech Legion Bank’s interior has one of the world’s most amazing glass ceilings. The large center stained-glass barrel vault gives way to two half-barrel vaults on both sides — truly spectacular.

My favorite Rondo Cubist exterior is on The Teacher’s Cooperative Apartment Building by Otakar Novotny (1923) in the Holesovice District appealing to both the professor of architecture and the professor of humor in me. The façade’s curves are basically half circles — facing down under the window – and facing upward on the pilasters (flattened columns) – giving the “crowned pilasters” a decidedly phallic effect.

Dating from 1967 is a Socialist building that I would have been proud to attach my name as architect (if they taught architecture in the second grade) – the Park Hotel — now called “Mama Shelter.” (Speaking of names — that’s not exactly my favorite for such an elegant building – sounds more like a homeless shelter for Mammas.)

Once again, recalling the great Le Corbusier – the entire hotel is elevated on piloti (concrete piers) similar to Unite d’Habitation in Marseille. Like New York’s United Nations building — there are two main glass facades bound on each side by masonry – windowless – facades. However, the visual boredom of a large expanse of glass windows dissipates by intermixing the windows with jutting vertical metal panels repeating from floor to the ceiling – juxtaposing its own unique counter pattern. The effect of those projecting vertical metal panels looks like the best 21st-century “Deconstructivist” architecture.

A very late Socialist Building (1989) is once again a hotel — the Hilton. It has four facades of black glass with the main façade’s front edges “cut away” – evoking the same refined elegance of I.M Pei’s black glass box with cutaway corner on 499 Park Avenue (1984).

The National Theater’s beautiful New Stage (1983) is modern enough so it complements the Beaux Arts National Theater – Prague’s main Opera House (1883). In fact, with its four clear glass facades – the New Stage reflects the older theater while basking in its own shining glory. It’s both elegant and functional. It’s one of the most elegant all glass buildings in the world – carrying on Prague’s tradition of one-of-a kind architecture and art.

The New Stage is an architectural surprise – and delight. There are so many applications of Cubism inherent in its modern all-glass design – it becomes a “Cubist Glass Building.” All 4 corners are beveled – creating an additional 4 narrow facades for a grand total of 8. There’s even wrap-around horizontal beveling – creating a “glass angled fold” — between all the facades and the roof. And if you look closely –you’ll discover the glass curtain is delineated with large superimposed triangle patterned glass. And if that isn’t “Cubist enough” — the New Stage’s popular nickname is the well-deserved perfect ending for this column – “The Ice Cube Building” – coming full Cube.