During the Pandemic many travel journalists are now promoting traveling in your own backyard by car. 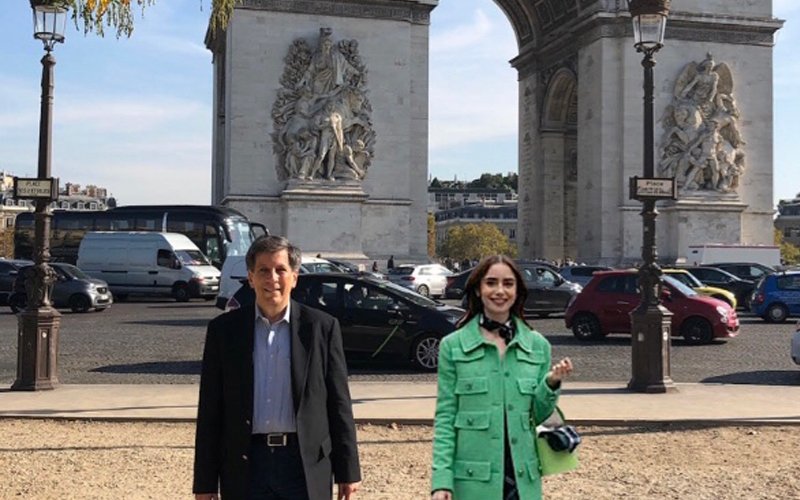 Since I live in an apartment in Manhattan and have no backyard — and no car – I’m traveling the world as much as possible – when I turn on my television.

While I long to travel to exciting new destinations around the world – and return to my favorite cities (while waiting for Europe to open its doors to Americans) — I just safely revisited a city in Europe.  How did I get there?   I watched the new Netflix series Emily in Paris.  Emily took me back to a better time and a better place — actually the best place – Paris.   While sitting at home watching Emily — while accumulating my Infrequent Flier Miles – I was transported to city I studied in (Ecole des Beaux Arts), fell in love with and fell in love in – Paris.

Watching Emily (Lily Collins) come down the stairs in an evening gown at the Paris Opera reminded me of Audrey Hepburn, similarly attired, coming down her stairs in the Louvre in Funny Face – which inspired many happy faces in 1957 to aspire some day to visit Paris.

While we’re waiting for our “some day” to safely return.  Let’s revisit our favorite destinations in our favorite movies and TV shows to remember the great times we had watching those movies and then visiting their locations in person.  That’s something I’ve been doing since 2001 when I came up with the TV series, Location Vacation – visiting locations around the world where movies were film.

[In 2001 movie studios were charging exorbitant rates to show their movie clips – even for PBS (which back then was interested in the TV series).   Now that people aren’t even visiting movie theaters — let alone the places where they’re filmed — there’s renewed interest the series especially since I’m on national television every week on BizTV’s “Liquid Lunch” doing humor with travel.  (Hopefully, I’ll also be back on TV soon doing travel with humor, too.)]  Shameless Plug.

The idea of sightseeing movie sites is nothing new.  In one of my favorite movies, Charade (1962), while walking with Cary Grant along the Seine, Audrey Hepburn (who took off her Louvre evening gown and put on her strolling suit), recalls where Gene Kelly danced with Leslie Caron in an earlier movie, An American In Paris (1951) – which coincidentally was filmed in Hollywood.

While there are Harry Potter Tours, Lord of the Rings Tours, Sound of Music Tours — as much as I love travel — I’d take those tours only if I were going to those countries and cities.  One of Rome’s most famous movie stars is the one and only — Fountain of Trevi — star of many classic movies such as Roman Holiday (1953)  Three Coins in the Fountain (1954),  La Dolce Vita(1959)  Gidget Goes to Rome (1963) to Woody Allen’s To Rome With Love (2015). In fact, so many movies were filmed in the major touristic cities such as Paris and Rome you can sightsee movie locations by site — instead of movie.

In this column, I’ve introduced my favorite seldom-visited museums many of which have been visited by movie crews.   Rome’s Palazzo Colonna has one of that city’s greatest private art collections.  In addition to perusing its paintings – take a look at the larger settings – its lavish rooms.  Upon entering its largest room, the Palazzo Colonna’s ballroom, Eddie Albert said to Gregory Peck, “It ain’t much, but it’s home” – home to the last scene in Roman Holiday.

One of my favorite Paris “Been There, FILMED There” museums is the Musee Jacquemart Andre, home to many magnificent Old Masters and home to Gaston in the movie musical Gigi (1958).  And there’s the museum where Audrey Hepburn wore her least flattering outfit – a washerwoman in How to Steal a Million (1966) – the fascinating, newly restored Carnavalet Museum (Museum of the History of Paris).  At least that’s the building where Audrey was seen entering and exiting but in her usually elegant attire.

Visiting a movie location enhances your enjoyment of the site and the movie – offering insights and secrets into both.   The interior of Carnavalet museum was a studio set.

Frequently a movie is identified with its city and vice-versa. Vienna is so absorbed with Orson Welles’ classic The Third Man (1949) that there’s even a Third Man Museum.  When you compare Vienna in 2020 to the Vienna of more thanseventy years earlier – it’s a testament to the rebuilding of a war-torn city just as the Rome of Roman Holiday is a testament to eternal beauty of the “Eternal City” – looking basically the same.  Whereas the high-rise Hong Kong of Jackie Chan movies, doesn’t even look like the same city of Love Is a Many Splendored Thing (1955).

As a kid The Third Man’s Vienna sewer chase and Disney’s Bon Voyage (1962) tour through the Paris sewers really turned me off from visiting those cities.   However, when I studied urban planning, I discovered that 19th-century Vienna and Paris were better planned than 19th-century New York.  They had separate systems for water drainage and a separate sewer for its namesake — sewage — unlike their American counterpart.  (So Location Vacation indirectly teaches city planning.)

Small towns and even cities are frequently identified with a specific movie.  Monaco has been the setting for many movies.  And because the principality is small – the entire city was a movie set.   If it weren’t the location for Hitchcock’s To Catch a Thief (1955)  – Prince Albert wouldn’t be where he is today.  In fact, Prince Albert wouldn’t even “be.”  For his mother, Princess Grace was the international Oscar-wining movie start, Grace Kelly, who met Prince Ranier while filming that Hitchcock thriller.

The smaller the city, the more it’s identified with a particular movie.  Even though Salzburg, Austria was the location of many movies such as one of my favorite comedies, Hopscotch (1980), not many people visit Salzburg to see that comedy’s locations.   No city is more identified with a particular movie than Salzburg and The Sound of Music (1965).   In the birthplace of Mozart, Mozart takes a backseat to the music of Rodgers & Hammerstein.   Do you hear children from around the world singing Mozart in the Mirabell Garden?  Not even music students.  Singing Do Re Me — where Julie Andres sang it in the Mirabell Garden — (too) many tourists even duplicate the pose of Julie Andrews’ last note – holding her head with one arm with her other arm up-stretched — on the palace’s steps.  (See photo of yours truly.)

And, yes, I took the Sound of Music Tour and loved it – and learned from it.   The Von Trapp family home was synthesis of two different locations – two villas. Frohnburg Castle for the driveway scenes.  And for the terrace-on-a-lake scenes, Leopoldskron Castle. And the interior?  A Hollywood set – but a great one with a ballroom that looked as if it were lifted from Vienna’s Schoenbrunn Palace.

And now America . . . . Because New York City has always been a movie location – filing movies is nothing new here.  When I was a student at Columbia University I used to eat at Tom’s Restaurant before Jerry, George, Elaine, and Kramer discovered it.  Now — having a reservation — helps.

However, some cities even celebrate a movie’s location with a statue.   Philadelphia tourism commemorated its location of Rocky (1976) with a statue of Rocky Balbao’s famous victory pose on the actual steps of its movie location — Philadelphia’s Museum of Art.  (Glad Salzburg didn’t bronze Julie Andrews’ Do Re Me pose!)   And some cities are well known only because a movie was filmed there – Fargo (1996).

I hope no one travels to see the location of this year’s Wonder Woman.  The rate many movies are going, to visit their locations you’d have to visit the inside of a computer – for computer-generated locations.

That’s why people are traveling to see international television movie locations. The real  “Downton Abbey” – Highclere Castle — is a big draw for Visit Britain and it has its own historical associations.  Besides its Neo-Gothic exterior by Sir Charles Barry (the architect of London’s Houses of Parliament) — an Earl of Carnarvon, the owner of the  Highclere, was a sponsor of Howard Carter who discovered King Tut’s Tomb.  No wonder Lady Crawley (Elizabeth McGovern) slipped on that bar of soap – the curse of King Tut.

The Ovation Network has given PBS and BBC competition for location filming.  Ironically the Ovation series Versailles has very few scenes actually filmed on location in Versailles.  In fact, I can use the many of its different French palaces and chateaux to teach a course,  “17th-Century French Architecture.”   The stairway is from Chateau Maisons-Laffitte. An early computer-generated depiction of Versailles is created around the real Sceaux Chateau – the Museum of the Ile de France – and former home of Louis XIV’s adviser Colbert – that burnt in the French Revolution and was reconstructed in the 19th century.  While Versailles’ main Grand Palace lost most of its furniture in the French Revolution — Versailles’ overlooked smaller palace gems – the Grand Trianon has early 19th century furnishings from King Louis Philippe and the Petit Trianon has 18th-century décor some actually owned by Marie Antoinette.

I’m particularly fascinated by cities doubling for other cities.  During the Soviet Union Reds (1980) couldn’t be filmed where the action really occurred in St. Petersburg when it was Leningrad — so Helsinki doubled as it did for Gorky Park (1983).  In Nicholas & Alexandra (1971) and Doctor Zhivago (1965) Spain performed double duty.

Some movie’s locations are arbitrarily on different continents while the story takes place in only one country.  The movie, Evita (1996), shrewdly begins with the Buenos Aires theater manager interrupting a movie to announce Evita’s death.  In the actual movie the scene of Evita’s elaborate funeral procession interrupted my viewing by switching the actual filming location from Buenos Aires to Budapest.  (Then it occurred to me what Buenos Aires and Budapest have in common.  Both city’s re-planning was inspired by Baron Haussmann’s mid-19th century Paris re-planning.)

Foggy Bottom’s Madame Secretary (of State) must be very “foggy” – since I don’t see Washington, DC.  It should be “Madame Secretary of the United Nations” since it’s really filmed in New York.   And there are two NCIS Los Angeles shows.  NCIS Los Angeles and the original NCIS, which is supposed to take place in Washington, DC, but is also filmed in LA.

One movie that bucked that trend of filming outside Communist countries was the Oscar wining movie, Amadeus, in which Communist1983 Prague doubled as 18th-century Vienna.   (Yet another reason to revisit Prague to do my “Amadeus Tour.”)

One city I have yet to visit is a city that doubles for cities around the world is Vancouver.

I’d like to take the tour, “Buildings Not Used As Vancouver Locations.”   And since I’m also a comedy professor (in addition to being an architecture professor), I’d like to write a movie that’s supposed to take place in Vancouver to really be filmed there — Vancouver as Vancouver!