Kick Up Your Heels in Italy’s Heel 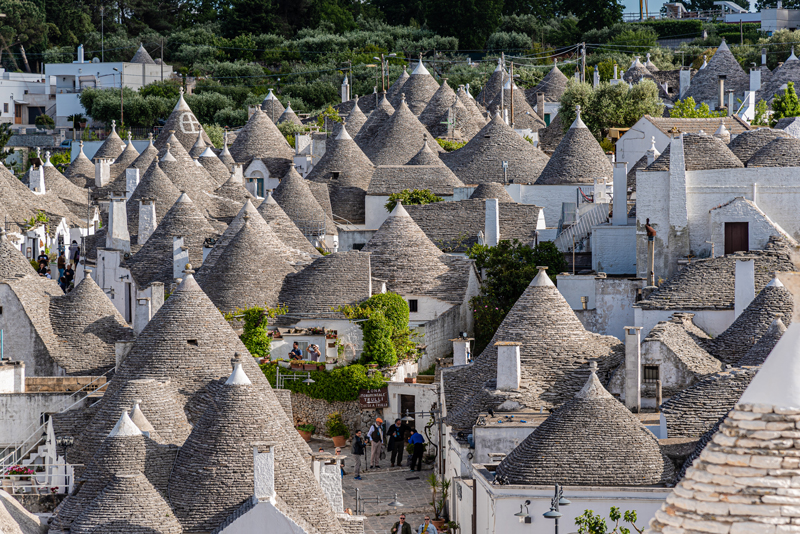 I just returned from a visit to Puglia — Italy’s “heel” — during high season. The only way you can skip the lines and avoid those additional long lines for security checks in Northern and Western Italy — is to become a king or president. Ruling that out — head South and East for Puglia’s gleaming white cities – sparkling against blue skies – and un-crowded beaches with dazzling white sand – and many other surprises that welcomed someone who’s been to 117 countries.

Puglia is on Italy’s Adriatic Coast facing Greece. So it’s no surprise that that Puglia has a Greek feel to it. Like Greece, Puglia is packed similar uncrowded, unhurried, white cities against a background of the bluest sky. Puglia, again like Greece is also known for its olive trees and olive oil. I even toured an olive oil factory. But more like Italy – Puglia’s also known for its wine. Yes, I also toured a wine factor, too. Maybe my next visit – Puglia will branch out to wine-flavored olive oil and I’ll tour that factory. (FYI: Those factories were as clean as Puglia’s cities and beaches.)

What really separates Puglia from every other region in Italy – is its trulli dwellings. A stone beehive-like building that reminded me of Greece, yet again – Greece’s beehive tombs of Mycenae. And there might even be a more than a passing connection. However, Puglia’s stone cone-shaped buildings — trulli — are not for the dead — they’re for the living – working, praying, and restaurant going . In fact, the ultimate Puglia experience is staying in a trulli. And it can even be a first class – luxurious experience. And the best place to vacation in a trulli is in the town of Aleberobello.

I always wanted to see an igloo and even stay in one. However, if you take an Alaskan cruise during the summer – the igloos are all melted. And by the time winter comes around there are no Alaskan Cruises, (If you believe that joke – I’ve a got a bridge to sell you connecting the Italian Peninsula to Sicily.)

Alberobello, a UNESCO World Heritage site, is such a special city with over a thousand trulli – the only thing that makes it even better is its location. It’s centrally located to make it convenient for day trips to the entire fascinating and varied Puglia Region.

If you were lucky to stay in a conical hotel in Turkey’s Cappadocia – as was I — staying in a more wondrous Truli in Alberobello is even a more unusual and rewarding experience. Cappadocia’s dwellings were carved out of rock. Alberobello’s were deliberately built that way. Cappadocia is pretty much isolated. Alberobello is in the center of Besides, Cappadocia is less than three hours by train from Rome.

The main street of Alberobello reminds me of Colonial Williamsburg’s main street, the Duke of Gloucester Street, with its colonial tradespeople plying their trades such as wig making , blacksmithing, print-setting. Walk down the main street of Alberobello and you’ll see its tradespeople plying their unique trades – basket weaving, cloth spinning, pasta making (Puglia’s special orecchiette-shaped pasta) and even stone-cutting – stones that are used in repairing the trulli.

In addition there are strange symbols on the roofs of many trulli on “main street” – which historians have deciphered as astral, zodiacal and planetary icons. The most unusual roof icons are the Jewish icons – which are even new to the rabbi of New York’s Temple Emanuel. Therefore, when I saw a plague in the garden, next to Alberobello’s main church, thanking the people of Alberobello for saving its Jews during the Holocaust, I wasn’t surprised

Since we’re in Alberobello’s main square, let’s look around. There are two fountains – which probably means that Alberobello has more fountains per capita than even Rome. There are also two elegant buildings facing one another — bookending the square on two sides – one is the City Hall the other a 17th-century palace. Framing the historic buildings are trees that are pruned square – which look more like they were replanted from the center courtyard of Paris’ Palais Royale. There’s a beautiful terrace adjoining the square with a breathtaking view of thousands of trulli stretching from the hills to the horizon.

I was lucky to have been in Alberobello with my friend – Massimo Andreoli — whose company, Wavents – recreates historical enactments all over the world. That’s exactly what he was doing in Alberobello –staging the citywide commemoration extravaganza of the day in 1797 that Alberobello became a city. The entire town turned out wearing enough Italian historical costumes from different eras to populate all the productions of Zefferelli-staged operas at one time! The 2019 celebration – (and it’s held every year) – was a salute from one UNESCO city – Venice – to another Alberobello.

I rarely write about food but I’m a dessert nerd — a flan freak. And now my favorite dessert in all Italy is Puglia’s version — Pasticciotti – a pastry filled with flan. If you like Portugal’s Pastel de Nata and Parisian Flan Pie – you’ll crave Puglia’s even taster version.

If you ever get the urge to sightsee the rest of Puglia and leave Alberobello – you couldn’t come to a better place. Alberobello connects by train to the two largest Puglia cities Lecce and Bari (love that name). And it’s perfectly situated for day trips all over Italy’s heel. So let’s visit Puglia’s highlights. But before we go, lets pack a big bag of Pasticciotti to take with us.

Locorotondo – Not far from Alberobello is a town – looming in the distance on a hill — like a gleaming white crown – the town of Locorotondo. When viewed from the valley below – the buildings appear to be curved like a crown – hence the name “rotondo.” “Loco” – because I’m crazy for this town with its two Romanesque churches. Every turn reveals balconies and alleys lined with flowers. There’s something magical even musical about it – so musical that the main square even has a music store. I was lucky to have visited on a day when a farmer’s market was held in the square below. When we drove away – I noticed something I haven’t seen anywhere else in Puglia. The rooftops had gables — something straight out of Holland.

Polignano – A picturesque hillside seaside town with its white medieval buildings tottering on a cliff overlooking the Mediterranean. In the cul-de-sac, carved out of the cliffs,is a beach with almost transparent aquamarine waves gently washing ashore. Ever the dessert aficionado — don’t miss a gelato from Polignano’s award-wining Gelateria Mario Campanella.

Excavated Ruins of Egnazia — Most excavation sites are of interest to only to archaeologists. Not this seaside excavation with it’s Roman and Pre-Roman ruins. In keeping with the sparkling while buildings and white streets of Puglia – I was delighted when I discovered something in Puglia I found nowhere else in Italy – a Roman road with large paving stones similar to Via Appia’s Roman road but with white stones instead of the off-black ones found all over the Roman Empire.

However, the biggest draw is in the basement of the wonderful National Archaeological Museum of Egnazia – an Etruscan wonder I haven’t even seen in Tarquinia – an Etruscan tomb with an automatic door. Yes, a stone boulder that moves out of the way inviting you to enter.

Lecce – A Baroque Italian city like no other. Just like that hackneyed expression — “The Venice of the North.” Lecce has its own – “The Florence of the South” — and yet no one ever describes Florence as “The Lecce of the North.” Neither is description is really applicable.

Lecce is to the Baroque what Florence is to the Renaissance. Unlike the Baroque in Rome or anywhere in the North — Lecce’s Baroque is like no other Baroque anywhere because of the composition of its stone – limestone – that is more malleable than marble or other stones. While Rome is Baroque in in inherent building shapes – Lecce Baroque is Baroque in application of Baroque ornament in unusual places. Scrolls supporting balconies have detailing more akin to Gothic gargoyles. Nowhere is that more apparent than in the resplendent San Croce – with its rose window lost in the middle of layers of Baroque ornament circling it.

Besides having its unique Baroque churches and palaces dominating many spectacular squares – there are even Roman ruins – a Roman Theater and a Roman Amphitheater. The Roman Amphitheater and Renaissance City Hall share the spotlight of Piazza Sant’Oronzo – Lecce’s main square. However, what guidebooks don’t tell you is Lecce has many surprises. There’s a Neoclassical Pantheon-like church and even an Art Nouveau school. The biggest surprise was Lecce’s new Jewish Museum.

Bari – Capital of Puglia – and its most populated and most surprising city (and not just because it has my name). The minute I stepped out of its meticulously restored train station — I was greeted by a welcoming fountain. While the old town is has the usual mysterious hidden passages and alleys suddenly opening up to squares with palaces and churches, Bari has one of the best-preserved Norman castles – and a very special Norman Romanesque church — the church of St. Nicholas. Tradition has it that it’s dedicated to our Christmas’ own St. Nicholas.

Bari’s elegant “new” town looks like a provincial small city – not in Italy – but in France. Bari is very Parisian with wide tree-lined boulevards. Truly chic.

However, the picece de resistance is the promenade lining Bari’s beautiful white beach for miles – with elaborate streetlights akin to the Art Nouveau lights lining Paris’ Pont Alexandre III. The repetition of those lamps — diminishing in size as they reach the horizon — forms its own distinct pattern marking the border between City and beach.

Like Nice – Bari a perfect “compromise city” – offering culture and the beach. In fact, Bari’s beautiful Art Nouveau Theater is practically on the beach.

I started this column saying that sights I’ve been recommending have no lines. No lines until we devote an entire show to Puglia on my “Been There, HAVEN’T Done That” WOR radio show, the new radio version of my JAX FAX column which is on WOR Sunday evenings at 9 PM. After we praise Puglia for an hour – there might finally be a few lines – but it’s worth the wait. Meanwhile, make a beeline to stay one of Alberobello’s trulli beehive hotels. 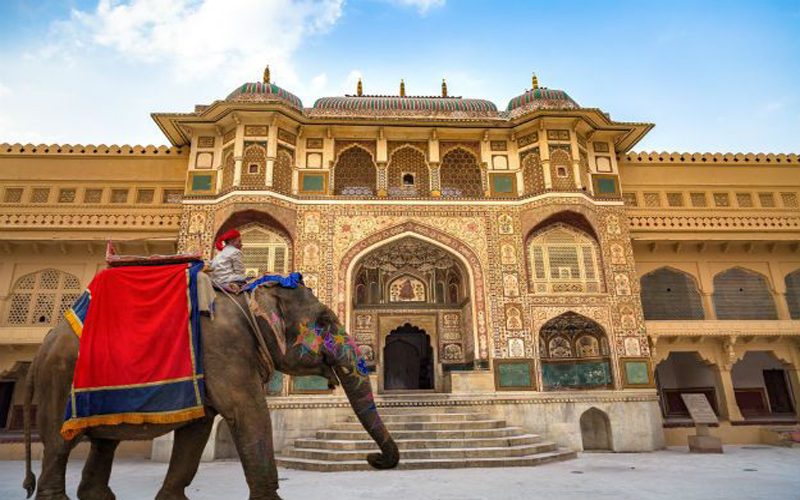