When it comes to entertainment, most people enjoy “Dinner and a Movie.” 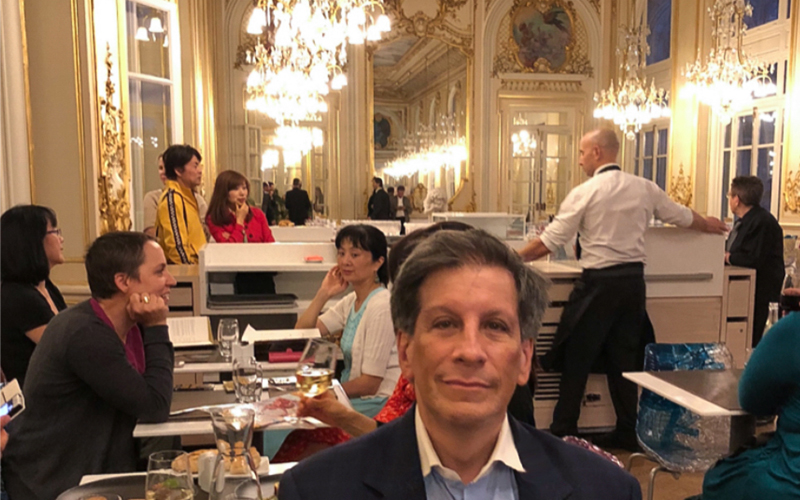 When it comes to travel – whether around the world or around the corner – my formula for cultural entertainment is “Dinner and a Museum” or better yet – “Dinner in a Museum.”

Sadly, there are many who think of “eating at a museum” rather than “dining in a museum” recalling their school days of either eating lunch from their metal lunch box in a large room or – in larger museums – eating in a nondescript, utilitarian cafeteria.

(By the time I was an intern at the Metropolitan Museum of Art – that beautiful fountain in their cafeteria was filled in with waiter service.  When I ate there with friends – I always poured their water from the table’s pitcher – doing whatever I can to bring back the memory of water in motion.)

I still look forward to eating in a museum’s dining room.  And with the passing of time – and with many more museums open evenings – museum dining rooms have increased in number and popularity.

Whenever I travel anywhere in the world that has a large museum – and the weather forecast predicts storms all day – I opt for spending that entire day in a museum.  That means eating in a museum instead of interrupting the day picking up your umbrella – using it – getting drenched anyway – and checking it all over again just in the hot pursuit of a cold snack.

As the popularity of museum dining increases around the world – whenever a small museum is remodeled – the addition of a restaurant is almost always included be it in the upcoming renovated Frick Museum in Manhattan or London’s wonderful Wallace Collection.  The recently reopened Musee Carnavalet in Paris – my favorite of all the world’s “City Museums”– just added a beautiful café.

In fact, museum dining has become so popular that frequently you’ll visit a museum just to eat in their restaurant.  Even famous chefs and restaurant entrepreneurs, such as Danny Meyer, have gotten on the bandwagon – or rather – foodwagon.  In Manhattan alone Danny Meyer opened two museum restaurants — the appropriately named, “Modern Restaurant” at MOMA (Museum of Modern Art) featuring gourmet chef, Abram Bissell’s, award -winning cuisine.  And Chef Michael Anthony at the new Whitney Museum’s Danny Meyer restaurant titled, “Untitled.”  Fine museum dining has spread from Manhattan to other boroughs.  In fact, it’s now the new norm at The Brooklyn Museum’s beautiful restaurant – the relatively new “Norm.” (Can’t wait to return to the Norm – and the terrific Brooklyn Museum, too.)

It’s de rigeur to have a restaurant – from the planning stage – incorporated into a new museum’s design.   Famous architects have been designing famous museums for centuries.  In the 21st century – famous architects are designing museums for their fine art and the fine art of cuisine.  The world’s most famous architect of famous museums is also the architect of restaurants for world-famous chefs.  While Frank Gehry was awarded many accolades for Spain’s Bilbao Guggenheim – the chef of the Guggenheim’s Nerua Restaurant, Josean Alijga, was also awarded a prize – a Michelin Star joining MOMA’s “Modern.”    At the MOMA you can see Van Gogh’s “Starry Night” and spend the night eating at its Michelin starred restaurant.

In Paris, Frank Gehry’s other museum is named after an old bag (manufacturer), Louis Vuitton  — “The Louis Vuitton Foundation” — and not its architect.  However, surprisingly the restaurant in Frank Gehry’s masterpiece museum is named after the architect, “Le Frank” – featuring haute cuisine.  And its chef is a protégé of world-renowned chef Alain Ducasse– the great chef Jean-Louis Nomicas.

Yes, museum restaurants are now bastions of haute cuisine.  I remember grabbing a waffle at Amsterdam’s Rijksmuseum snack bar when I was a kid.  Now, since its early 21st-century renovation – its restaurant, “Rijks,” is now Michelin starred.

Many museum restaurants’ cuisine reflects their museum’s collections.  While the Rijksmuseum displays the History of Dutch Art – the Rijks Restaurant serves dishes representing the Culinary History of the Dutch.   And that trend is spreading.   Two Smithsonian Museums give new meaning to “Dining at the Mall.”  My favorite is the Smithsonian’s African American Museum’s restaurant — “The Sweet Home Café” — featuring wonderful and diverse African American dishes – which you can now serve at home.   No, not as takeout – as recipes you can cook from the “Sweet Home Cafe Cookbook.”  Also on the Mall in the Museum of the American Indian is the Misitam Native Foods Café.  Go eat there ASAP to devour their terrific Indian Pudding before they change its name to “Native American Pudding.”  And back in Manhattan – just a few blocks from home — is the perfect restaurant in the perfect museum location — one of my favorite Kosher delis – “Russ and Daughters”– inside The Jewish Museum.   (And, yes, there’s also a Russ and Daughters Cookbook.)

This year, they’re joined by a just-opened museum (during the Pandemic, no less) the stunning new Bourse Commerce Pinault Collection of modern art – in a stupendous round building dating back to the late 18th century and totally renovated by the great architect, Tadao Ando.  Its gourmet restaurant – the Café-Restaurant – has yet another great view of Paris — along with a view of the Pompidou Center and its restaurant.  (Speaking of coming “full circle.”)

There are many museum restaurants with some of the best views in their respective cities.   While the Louvre, like the Metropolitan Museum of Art, boasts several good restaurants – only one has an overhead view of the Louvre’s Pyramid – Café Marly — with views extending from the Tuileries stretching to the Arc de Triomphe and even beyond to the Grand Arc de la Defense.

Before we leave Paris – there’s another museum restaurant with a great view – this time a relaxing view – of a garden – a garden within the actual museum – the restaurant in the Musee de Petit Palais — Le Jardin du Petit Palais.   It’s yet another great “Been There, HAVEN’T Done That” museum –housed in yet another magnificent building  — a great ornate Beaux Art building constructed for the 1900 Paris World’s Fair.   Just as the Palais de Tokyo houses the Paris Museum of Modern Art – the Petit Palais houses the Paris Museum of 19th Century Art with many masterpieces of painting and sculpture – including many famous Impressionist and Post Impressionist paintings.  The Musee de Petit Palais is the city equivalent of the National Museum of 19th Century Art – the world-renowned Musee d’Orsay.  (And like my other “Been There, HAVEN’T Done That” museum recommendations  – the one thing you’ll never find there is crowds — especially important since the Pandemic).

And if you want to visit a museum with both a garden restaurant and a roof terrace restaurant with spectacular views – a must-see and must-eat museum is the African, Asian and Oceanic Art Museum in star architect Jean Nouvel’s masterpiece the Musee Quai Branly Jacques Chirac (yes, the French name their new museums after their Presidents) – with its just opened Jacques Café in the museum’s garden and the elegant vegetarian gourmet, Les Ombres Restaurant, crowning its roof with a panoramic view of Paris.  (And like its name, “Les Ombres” – shadows – it stands in the shadow of its neighbor – the Eiffel Tower.)

London is also a city of museums where you can further enjoy a museum’s restaurant by marveling at the view.  My two favorite London museum restaurants with spectacular views are the Portrait Restaurant in the National Portrait Gallery overlooking Trafalgar Square and the Tate Modern Restaurant at the Tate Modern’s new Blavatnik Building with a spellbinding view of the Thames and St. Paul’s.

While Rome is one of the world’s oldest cities — it has some of the newest museum restaurants.   Surprisingly, Rome’s largest museum — and one of the world’s most famous – the Vatican Museum — only has a pizzeria.   Just as Barcelona and Paris have museums with restaurants by a world-famous architect, Frank Gehry – Rome is also keeping up with the designer-architect museums.  Besides being home to the great architect, Renzo Piano’s three-theater complex — Parco della Musica – Rome is also home to yet another “starchitect” – the great Zaha Hadid – with her masterpiece museum – MAXXI – National Museum of 21st Century Art.   In the MAXXI Hadid eschews angles for pouring, flowing lines like molten lava hardened in place – as a 21st century version of Pompeii.   Zaha Hadid’s 21st-century breathtaking MAXXI has two restaurants – “Mediterraneo” with delicious desserts from the pastry chef who was the winner of TV’s “Bakeoff Italia.”  The MAXXI also has the Palombini Café serving lighter fare.

My favorite “Been There, HAVEN’T Done That” museum in Rome has almost as many masterpieces as the Vatican Museum and it’s in a building complex that was designed by Michelangelo – in addition it overlooks the Roman Forum.   It’s the Capitoline Museums.  And like my other “Been There, HAVEN’T Done That” sites – you don’t have to wait on any lines like you do at the Vatican Museum where there’s even a line for “Skip the Lines.”   And the Capitoline Museums restaurant — the Terazza Cararelli — like the Hotel Hassler,  the Hotel Eden’s and the Hotel Atlante Star’s restaurants — has one of the best views in Rome.  The Terazza Cararelli also has one of the most unusual views – overlooking the Marcellus Theater with its Coliseum-like façade, and the towering square-domed Great Synagogue and Jewish Quarter.